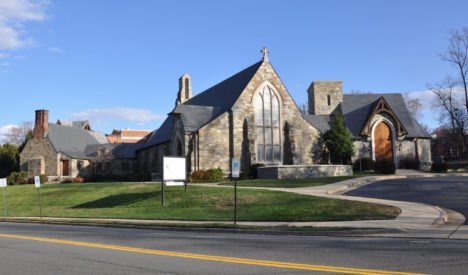 We live our mission through regular participation in the Eucharist and the practice of our baptismal promises. Traditional Eucharistic liturgy and fine music are hallmarks of worship at our parish. Please explore our website to get to know us or, better yet, come visit!

This is a press release from the City of Alexandria dated  August 1, 2022.  If you would like to attend the Remembrance Ceremony, please reach out to Father Santi at [email protected].

The City of Alexandria invites the community to a Remembrance Ceremony of the 1899 lynching of Benjamin Thomas and the heroes who tried to defend him on Monday, August 8, at 6 p.m. at Market Square.

On August 8, 1899, a lynch mob hunted down, tortured, and killed 16-year-old Benjamin Thomas, an African American boy and native Alexandrian. Thomas was arrested on Monday, August 7, 1899, for allegedly assaulting a white girl, but this was never proven. That night, Black community leaders had warned the police and mayor that another lynching, similar to the lynching of Joseph McCoy two years earlier, might occur. When the authorities refused their entreaties, a number of African American Alexandrians tried to protect Thomas themselves, standing guard near where he was being held. The police arrested them, and the next morning, they were, tried, fined and sent to a chain gang.

During this remembrance program, the community will recognize and offer an opportunity to reflect upon the lynching of an innocent Black youth and the subsequent terrorizing of Alexandria’s African American community. We will pay special tribute to the Black heroes who were willing to sacrifice their lives and livelihoods to protect a boy from an impending and torturous death.

In addition to the Remembrance Ceremony at Market Square (301 King St.), all are invited to:

For more information on the Thomas lynching, please visit “The Lynching of Benjamin Thomas, August 8, 1899” section of the Alexandria Community Remembrance Project (ACRP) webpage. You can also learn more about the ACRP, related projects, and historical events there.

ACRP is a city-wide initiative dedicated to helping Alexandria understand its history of racial terror hate crimes. ACRP conducts research, education, programs, and events that commemorate Joseph McCoy and Benjamin Thomas and explores the long-term impacts upon Alexandria’s African American community. Working with the Equal Justice Initiative Remembrance Project, ACRP will receive a steel pillar that memorializes McCoy and Thomas and with it will create a permanent space for remembrance in the City. The work of ACRP is an effort to establish a welcoming community bound by equity and inclusion for all people.

Thomas and McCoy are the City’s only two documented lynchings thus far. McCoy was lynched on April 23, 1897. This year is the 125th anniversary of that event. It was commemorated on that date.